A downloadable demo for Windows

is a single player 16-bit RPG that combines world exploration and interaction with an orthographic grid-based tactical battle system. In many ways, War of Velana is a spiritual successor to the Shining Force series on the Sega Genesis. Elements of those games are the core, and combine with some design ideas from Fire Emblem and Final Fantasy Tactics to create a new tactical experience. In War of Velana, your characters have static classes and gain a variety of skills and equipment upgrades as you progress through the game. In between combat, you’ll be able to explore and interact with the world around you.

The world of Velana, in its current state, has four nations:

Our story starts in Alta near the foothills of the Goravia Ridge, outside the small village of Pell. A pair of hunters close in on their mark. As they make their way back to the village, they run into Jon, a trader who frequents the northern roads. They help him repair his cart, but quickly realize that bandits have taken over their home. Events continue to unfold and the party bears witness to a mysterious encounter and potential sparks of a new war.

The demo covers the first chapter of the game and is about 90% content complete. There will be additional bug fixes, side content, and other improvements added as we have them ready. If you play the demo, we'd love to know your thoughts or any issues you encountered along the way!

* Item and Stock clusters have been removed since that functionality is on the Status menu now.

* Party Screen functionality has been rebuilt but not altered.

* System menu is now integrated into the main cluster menu.

* New combat animations including a full overhaul of character animations.

* New music tracks have been added to new scenes and replace some old music in existing scenes.

* Jessia is now added to the game as an ally (with new scenes relating to her joining the party).

* Rita now has one of her two hunts for you to do once the main demo storyline events are complete. (after Jessia joins)

* New sound design for UI and many attacks and enemies.

* Wolf enemies have been removed from the game and replaced with Rock Grumps.

* Completely redone and upgraded many tilesets and objects.

* Fixed various bugs in Save and Loan functions

Hey I noticed that whenever I try the demo, it ends up becoming too big for my laptop's screen for some reason. By that I mean some part of the game is cutoff as if my screen isn't big enough.

Hi there, sorry for this issue! The current demo is built specifically in 720p so if your monitor size/resolution isnt scaled from that it'll cut off parts of the screen. We're working on an update that will eliminate this issue for all screen sizes, but it isn't ready just yet.

I just finished the demo and I think I'm in love 😍

This was a really great experience and scratched that tactics rpg itch I've had for a while. The environment art is really well done, especially the cave tileset. I'll admit the only tactics rpg I've invested more than 10 hours into is Fire Emblem so I'm unfamiliar with the mechanics of the Shining Force games. I have a few suggestions that might help with the development of the game for people like me:

But with these problems aside, I can't wait to see the finished product! I'm excited to see what next in the story. Keep up the good work!

Thank you so much for playing and I'm glad you enjoyed it! There a number of things we'll be adding to the demo to inform the player better, and I need to update some stuff on the itch page as well!!

Hey guys, just wanted to drop you a line and say "great work!" A worthy tribute to the Shining Force games. I'm really enjoying the game a lot, everything from the story, sprite work and music just hit all the right SF nostalgia buttons.

Thank you so much! Glad you enjoyed the demo!

As a fan of the Shining Force series, I enjoyed playing this, it is really well done.  A few things:

- When Karissa heals - other player's health bars will increase, but the animation does not play when she heals herself.

- In the shop, the Yes / No confirmation does not load when buying / selling, an extra button press is needed to make it visible.

Also, the fact that the shop automatically asks if you want to sell your lower weapon when buying a stronger one is excellent.

Thanks for the feedback! The self-heal HP bar bug is on our list to fix, I'll note the shop Y/N as well!! And yeah we wanted a good amount of quality of life features in shops and other areas. I'm glad enjoyed that!

Do you think you will ever port this to mobile

It's possible! Our plan is PC and Mac release and then consoles, but mobile ports could be on the table as well. Nothing is guaranteed right now for ports, however.

Wow, that looks fantastic! Very unique and original graphic style! I'll give the demo a try.

Thank you! I hope you enjoy it! 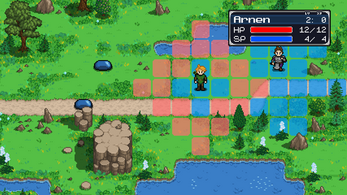 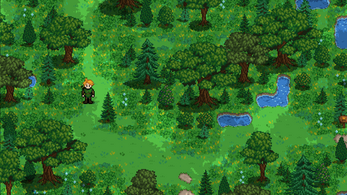 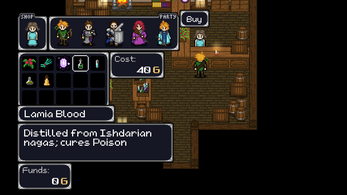 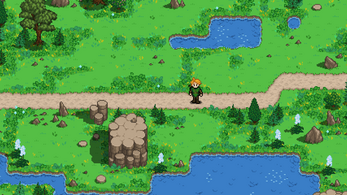 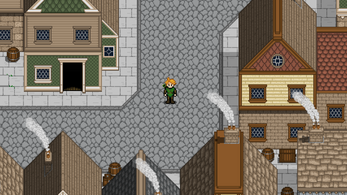 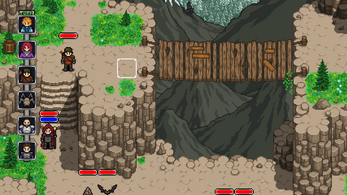 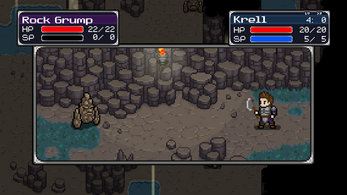 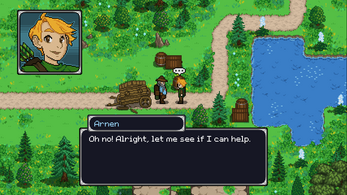 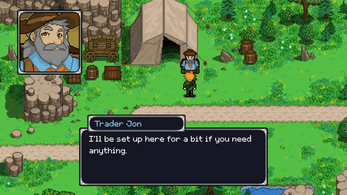 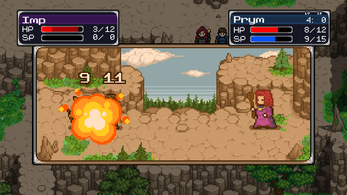 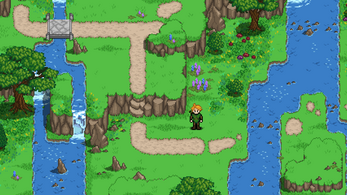 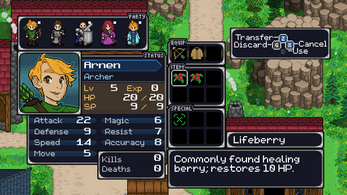 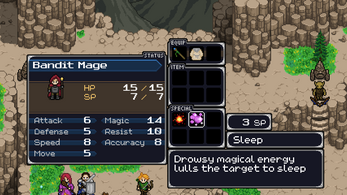 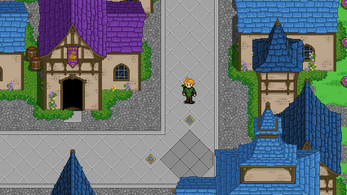